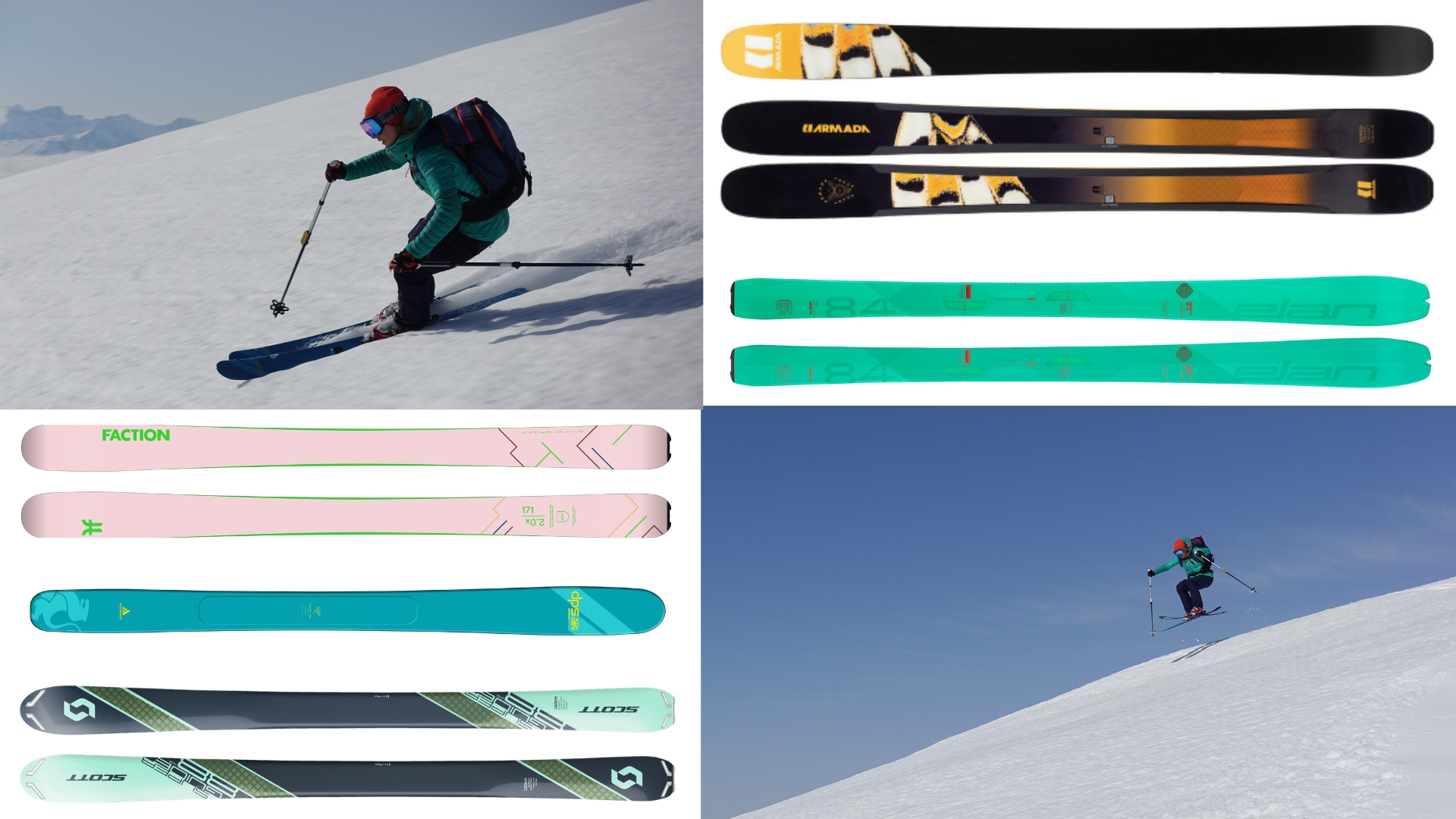 With plentiful snow remaining up in the Arctic North, winter may not be over quite yet but none of us can deny that the seasons are definitely changing and summer is but a hayfever-induced sniff away.

With warmer days comes many great things - biking, climbing, hiking, running and sunset beer drinking for example. And epic sounding activities that modern-day folks seem to call 'wild camping' and 'wild swimming' which used to just be called 'camping' and 'swimming' in my day but that's a rant for another post....

The most important thing about the arrival of summer is that it means we're closer to NEXT winter and this is a very good thing indeed.

We've spent a huge majority of the past 6 months checking out all the new kit for Winter 2020 and can confirm it all looks very tasty.

If you're into backcountry skiing then next winter will see more choice of women's-specific touring skis than ever before.

Here are five to keep your eye out for when Winter 2020 rolls around: 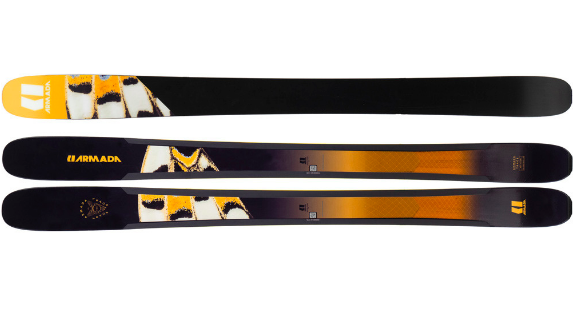 If you’re looking for a fat yet impressively lightweight backcountry ski for slaying powder and short hike-and-ride freeride-style adventures then the new Armada Trace 108 is absolutely worth a look.

At 108mm underfoot, the Trace 108 is undeniably built for deep days in the backcountry yet is surprisingly nimble for such a 'big' ski.

We tested it in tricky off piste conditions (aka 'real' conditions that us non-Japanese based mortals have to deal with most of the time!) and found it to be really responsive in variable snow.

Weighing in at 1,550g (164cm) with a 17m turning radius, the Armada Trace 108 hits a real sweet spot for such a wide ski. It's light enough that it won't hold you up on the uphill section of a day tour yet solid and stable enough to charge when off piste conditions are primo. Floating in the deep stuff might be in its DNA but the Armada Trace is no one trick pony. We found it to be poppy and playful in soft spring snow and equally adept at ripping around the resort on cruisey groomers.

A seriously impressive and versatile ski for freeride tourers who like a wide platform underfoot. May come unstuck on narrow steep skin tracks - we have yet to try!

Having admired DPS's super striking spoon-like shaped skis for many a season, we finally got our hands on a pair to test this spring and man, did they live up to the hype.

Whilst the DPS Yvette A100 RP may not have the catchiest name in the world she sure packs a punch out on the mountain. The A in the A100 signifies that this ski sits in DPS's Alchemist range - a superlative series of pure carbon lightweight skis using the finest of materials to deliver a primo ride.

Weighing in at 1,760, the new high performance Yvette A100 RP doesn't pretend to be the lightest ski in the skin track but if you're packing half-decent amount of mountain fitness and a pair of lightweight touring bindings, you won't notice a thing. We combined the Yvette A100 RP with the new Fritschi Xenic pin binding on a recent touring trip to Norway and found the combination to be an absolute winner.

The descent is where the DPS Yvette A100 RP's really came into their own. With a soft flex and deep rocker, the Yvette A100 RP's were playful and floaty in the powder, powerful and damp in the crud and surfy as hell in the life-affirming spring corn snow. Carbon skis have a tendency to jar and jolt but these gals felt stable, solid and reliable in challenging conditions - a triumph that goes a long way to justifying their likely premium pricetag.

In addition to being the best of floaty friends, the DPS Yvettes didn't let us down on the maneuverability front.  The 15m turning radius meant they were super easy to get into a turn and pivot through steep narrow couloirs and the infamous tight Norwegian trees.

The Yvette A100 RP's were such a blast to ski, put a massive grin on my face and made me feel like a kid again - thank you DPS, I'm totally converted!

BEST FOR – ADVANCED SKIERS WHO LIKE TO CREATE, EXPERIMENT AND REALLY OPEN UP ON THE DESCENT - SO PLAYFUL!

I wasn't expecting to get on particularly famously with the new Ibex 84W Carbon touring ski due to the 84mm platform being rather narrower than my preferred go-to underfoot dimensions but these skis are actually pretty damn terrific!

As one would expect from a carbon skinny-ish ski, the Ibex 84W is light, agile and designed to climb mountains like a...well, ibex obvs... which is ideal if you're looking to bag summits at speed but what really sets them apart is that you get all of that uphill nimbleness without having to sacrifice skiability on the descent.

Weighing in at just 1,270g in a 170cm ski, I admit I anticipated a chattery, somewhat flakey ride - not a bit of it as it turned out! The Ibex 84 W's were responsive, capable, reliable and determined - pretty much everything you don't expect from a lightweight touring ski!

Elan's Bridge Technology powers this light yet surprisingly stable ride. It's about reducing weight (tubelight wood core and vapour tip inserts) at the same time as increasing the power transfer from edge to edge (carbon power shell and carbon rods).

All in all it's a cracking ski with a seriously impressive weight-to-performance ratio that will put many a skinny smile on the faces of the fast and light crew.

At 96mm underfoot, the new Faction Agent 2.0x will please those looking for a quiver-of-one style backcountry ski that does everything really very well.

Yes there are lighter skis in this mid-90 category which may be better suited to multi-day tours where every gram counts but we tend to gravitate towards slightly more solid rigs like the Agent 2.0x as we find it just helps us enjoy the descent that bit more. If we’re really struggling on the uphill we’d rather work on our mountain fitness than opt for a super light ski that jitters and chatters on the down. But that’s just us!

If you struggle in difficult off piste conditions or find yourself in steep couloirs having to turn on a dime, you’ll appreciate the 16m turning radius and easy to pivot feel of the Agents.

Seriously awesome skier and legendary lass Anna Smoothy (Faction's Head of Marketing) is a massive Agent 2.0x fan - "for touring and everyday resort shreds the Agent 2.0x is my go-to."

New to Scott’s legendary Superguide line-up for 2019/20 is the women’s specific Superguide 88.

Designed for advanced backcountry skiers, the Superguide 88 W is a great option for anyone looking for a lightweight high performance ski that climbs like a pro. At just 1,200g in the 160cm length we tested, it sits alongside the Elan Ibex 84 W in terms of weight but offers a bit more width underfoot if you’re looking to make max gains underfoot for min overall weight.

As one would expect from a lightweight ski with full wood core, the Superguide 88 W is nimble and immediately responsive. Ideal for those end of tour whacky races when you’re thrashing through the woods or hammering down icy narrow forest tracks at speed!

Whilst we normally go for skis with a little more girth underfoot we were really impressed by how balanced, stable and reassuring the Superguide 88's felt on the descent. These really are cracking skis with mass appeal and we're expecting to see lots of them on the skin track next winter!

BEST FOR - FOLK LOOKING FOR A DEPENDABLE ALL-ROUNDER FOR DAY AND MULTI-DAY TOURS THAT'S BALANCED, NIMBLE AND RESPONSIVE

Buy the DPS Yvette A100 RP if you're looking for a stunning looking, super playful and mega surfy ski

Buy the Faction Agent 2.0x if you're looking for an all-rounder with freeride heritage that climbs and descends with ease

THESE ARE JUST A FEW OF THE MANY SKIS WE'VE TESTED SO IF YOU'RE IN THE MARKET FOR A NEW RIG THEN HIT US UP WITH ANY QUESTIONS BELOW!